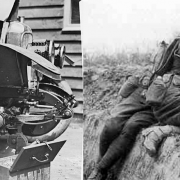 The New York Times (1921 01 09) estimated that over 76,000 American veterans returning from Europe during the Great War, were injured–physically or mentally–as a result. These veterans did not return to their former lives easily or well. They brought injuries none could have anticipated, both physical and psychological, due to the nature of that modern war. The fate of an entire generation of young people was altered because of ongoing trauma and disability caused by combat during The Great War.

World War I, a trench war, introduced new technology including machine guns, grenades, tanks and armored vehicles, claymores, and chemical gas. More primitive tools of warfare, such as the French raiding hammer, the billhook, the Fascine knife, rifles, hatchets, and other close-range weapons, were also widely used. Many of the wounds were survivable, but incredibly disfiguring. In addition, tens of thousands were affected by the influenza pandemic as well as outbreaks of measles, and tuberculosis. A limited number of hospitals were available in the United States that could effectively treat those who were physically injured while in service, and only a few rehabilitative training opportunities existed after the war.

On January 8, 1921, the Santa Barbara Morning Press printed an article about the fate of veterans who were left with mental disability incurred during WWI. The article notes that legislators had not set aside any money for the welfare and care of those veterans suffering from ongoing disability, whether physical or psychological. Victims of shell shock, a new affliction (now known as PTSD, post-traumatic stress disorder), returned to find little, if any, assistance for their psychological wounds. Many never recovered.

Veterans identified with psychological issues were sent to insane asylums, alms houses, or sanitariums. In order to enter such a facility, the US required that a court of law judge find the individual to be “an insane pauper,” which added a new layer of demoralization to those already injured. Once committed, most were forgotten as the federal government did nothing to ensure “they were properly cared for or to see if the institutions in which they are confined are even fireproof and fit for human beings.”

The American Legion (founded in 1919), joined with the Disabled American Veterans organization founded in 1920, to raise awareness of the difficulties veterans faced, as well as to force the government to create avenues for support of returning veterans and treatment of those injured, though few actual remedies were put in place.

Black, Asian, Native, or Americans of Color who were called to serve in the American armed forces faced discrimination during their enlistment and limited veterans’ services when returning to the US. Despite serving with courage and honor, Americans of color still faced Jim Crow laws, the Anti-Japanese movement, the Chinese Exclusion Act, among other restrictions to their civil rights. Most were denied the right to vote in the United States of America.

Scott’s Official History of the American Negro in the World War ,  a “profusely illustrated” work, documents the experience of Black military members during WWI.

The January 12, 1921 edition of the Santa Barbara Morning Press reported that one Japanese American, Frank Maso Sasaki, petitioned for citizenship based on his service in the armed forces. Mr. Sasaki  was born in Honolulu, Hawaii, and was “admitted to citizenship” by District Judge Maurice Dooling. Judge Dooling stated that “anyone who enlisted when the United States needed men deserved to become an American citizen.”

The Veterans’ Memorial Building on Cabrillo Boulevard in Santa Barbara lists the names of Santa Barbara County’s military members who died in service during times of peace or war.

To be killed in war is not the worst that can happen.

To be lost is not the worst that can happen.

To be forgotten is the worst.

Santa Barbara County is fortunate to have Pierre Claeyssens Veterans Foundation as a community resource. Local philanthropist Pierre Claeyssens was a child growing up in Belgium during WWI. He credited the United States military for saving him and his “countrymen from the German occupation during World War I.” Forever after, Mr. Claeyssens advocated for the rights and well-being of US veterans and to ensure no veteran would ever be forgotten.

The National Archives provides access to military records for individuals who served during World War I. You may find more information, here.

Battle Scars – Reconstruction of the Face

According to the Public Domain Review, the first textbook on plastic surgery was published by Italian Dr. Gaspare Tagliacozzi in the sixteenth century. The consequence of modern warfare left over twenty million wounded military personnel.  In 1918, a movie entitled Plastic Reconstruction of the Face, chronicled the work of Anna Coleman Ladd, an American artist in Paris. Ms. Ladd used her skills as a sculptor to create face masks and prosthetics for those whose injuries were permanently disfiguring.