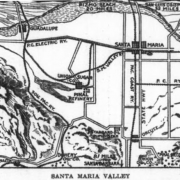 It’s hard to imagine a time without telephone service, but in Santa Barbara County in the 1920s, the technology was revolutionary. By 1920, 35% of American homes had telephone service, though the number was far less for rural areas like much of Santa Barbara County. Telephone lines were strung from pole to pole, throughout the region, though fires, floods, earthquakes, storms – even a bird – could damage the line and disrupt phone service for days or months at a time. Prior to the 1920s, communicating at a distance was limited to sending telegraphs or via USPS mail.

Communication had gone live, whether to a shop around the corner or to a governmental office at the other end of the country. Residential customers were usually grouped into “party lines,” with three or four households sharing one line. While the main line was shared, calls were identified by a unique ring assigned to each number. The method did allow for people to eavesdrop on calls placed to other individuals.

Transatlantic lines laid beneath the ocean allowing for international calls between the United States to Europe. Business dealings were expedited with the advent of telephones, and customer bases were increased. Families, friends, sweethearts enjoyed having conversations even from a long distance.

Like other hallmarks of the 1920s, telephones, like automobiles and airplanes, virtually shortened time and distance between individuals. It seemed all of society moved at a faster pace than ever before.

By 1927, an increase in automated telephone exchanges and new dial telephones put the power of communication in the caller’s hands. A film from 1927 provided guidance, albeit silent, in using the newest technology:  How to Use the Dial Telephone.

Along with the ability to make and receive calls, cities and towns provided customers with local directories. In addition to names and numbers, state and local government information was included, along with advertisements.

Telephone Directory for Santa Maria, CA – 1922 and Beyond

Telephone directories were a vitally important item in any home or business. In the 1920s, not only did listings include a telephone number, but the location of an individual’s residence, employment status, and place of employment were often included, and the names of high school students and their phone numbers were often listed, as well.

The old style of residential telephone directories were obsoleted with the advent of cell phones, as telephones were no longer associated with a physical location, but with an individual, instead.