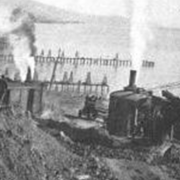 Growth of California Roads and Highways in the 1920s

After the war, many Americans purchased their first cars. By the early 1920s, more than 15 million of Ford’s Model Ts were sold in the United States. That dependable, affordable model of automobile put more people on the nation’s roads than ever before. Many were headed to The Land of Sunshine.

The Model T was not the only option. The Automobile Trade Journal provided a wealth of information about all makes of cars, including Chalmers, Studebakers, Haynes, Jewitts, and Kissels. Various models–roadsters, speedsters, sedans, coupes, phaetons, broughams, touring cars and others–gave automobile owners many options.

The country – along with individual states, counties, and cities, struggled to meet the growing need for paved highways to accommodate travelers. In 1923, a two-cent-per-gallon of gas helped fund the enormous undertaking. In 1925, The United States Highway System helped to identify and standardize interstate roads. CalTrans states, “The most important change created by the act included the provision that state governments, rather than for-profit private road clubs, administer the system.”

Today, California has 400,000 total lane miles throughout the state. This was not accomplished easily or quickly.

Some construction equipment was operated by steam power – such as generators, steam shovels, steam rollers, and even steam tractors. Building and maintaining California’s roads has always been vitally important, labor-intensive, and dangerous work.

The California Department of Highways and Public Works magazine includes numerous stories about roads and highways built in Santa Barbara County in the 1920s. There is a good article about the construction of the road known as Ortega Hill (image above), information about the coastal highway between Santa Barbara and Ventura Counties, as well roads built in Santa Maria, Cuyama, and other locations in the area. By 1923, The California Highway Commission became its own entity.

The Caterpillar tractor and other heavy duty equipment was vitally important to create roadways where there were none. The film, Industrial Uses of Caterpillar Tractors, offers a glimpse into the making of America’s roads, as well as other applications for earth movers, graders, rollers, and other modern equipment the country had come to rely upon.

A film from the late 1920s entitled Maintenance of Roads, was created by the US Department of Agriculture, Bureau of Public Roads. The hands-on method for maintaining roads is clearly a slow and labor-intensive endeavor in the 1920s.