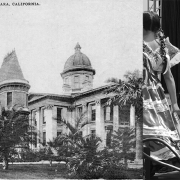 Santa Barbara County will celebrate Old Spanish Days from August 3 – 7, 2022. The four-day event returns after a two-year hiatus due to the COVID pandemic. The City of Santa Barbara welcomes tens of thousands of visitors who come for the parades, the rodeo, the food, dancing, and music.

A history of Old Spanish Days is offered by Erin Graffy de Garcia, local historian, in an article published by Noozhawk in 2017. Ms. Graffy de Garcia advises that the celebration celebrates the “Rancho period” of Santa Barbara County’s history.

Ms. Graffy de Garcia writes, “‘Our Fiesta includes the patronage of the Santa Ynez Band of Chumash Indians, and the participation of and presentations by the Coastal Band of the Chumash Nation. This is what is meant by ‘unity through community.'”

The Fiesta tradition began in 1924. In June of 1925, a devastating earthquake wrecked much of downtown Santa Barbara, including the old courthouse. While citizens considered canceling the event scheduled for August of that year, a decision was made to go on with the celebration. They did so with much success.

In August of 1929, the current Santa Barbara County Courthouse was completed. The iconic jewel was dedicated in a public event during Old Spanish Days in 1929.

Opening with the dedication of the new $1,500,000 Spanish type courthouse on the afternoon of August 14…Santa Barbara will celebrate again for four days its old Spanish Days Fiesta with free dances and public attractions.

Governor CC Young and state officers of Native Sons and Daughters of the Golden West will attend the dedication and remain for the Old Spanish Days. Will Rogers, Douglas Fairbanks, and Mary Pickford and a host of other movie stars attend the fiesta every year informally.

Within the next few days, practically all of the citizens here will don Spanish costumes. More than 1000 characters, Indians, ’49ers, Fremont’s soldiers, pirates, and Spanish vaqueros will be seen in the historical parade on Thursday, August 15.

Blooded horses from famous ranchos will appear in the parade.

Two of the Southern Pacific’s oldest locomotives will be used in the re-enactment of the arrival of the first train in Santa Barbara. Several hundred characters will take part in the pageant Saturday afternoon.

On Friday afternoon, the Ruiz-Botello pageant will be given in the patio of the new courthouse. This pageant is given by two of the oldest Spanish families in California. There will be singing and dancing and general merry-making.

On Thursday and Saturday nights, the pageant, Romantic California, in which 300 characters take part will be given.

The magazine, California Southland, published an article entitled, Old Spanish Days in Flower in Santa Barbara, While the article does not refer to the rancho days that Ms. Graffey de Garcia describes as the impetus for the celebration, the article cites “…the sweet romance of Spain.”

“To no other community the West has it been vouchsafed to retain traditions, memories, customs and delightful conventions of the early Spanish days in the sense that it has been given Santa Barbara, and she has received and held the trust sacredly.”

The photos of that long ago Fiesta are lovely.