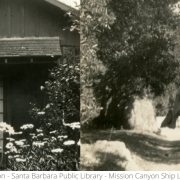 The rural, agricultural nature of the county in the 1920s necessitated that, on occasion, books be delivered to the more remote locations by librarians who traveled on horseback. It was not unusual for patrons, as well, to travel to their closest branch of the library on hoof, as depicted in the photos above. The Ship Library, pictured above, was sited in Mission Canyon. While many of the locations listed in the News Notes of California Libraries for Santa Barbara County have disappeared through the years, the county’s libraries continue to evolve, providing information, events, and services that meet the needs of an ever-changing world.

The Edson Smith Photograph collection is hosted locally by the Santa Barbara Public Library. The collection contains over 3100 early images of Santa Barbara County dating from the 1870s-1950s, many of which were collected by Santa Barbara native, and long-time resident, Edson A. Smith (1877-1947). The photographs capture historic buildings, adobes, houses, views of State Street, cultural landmarks, local dignitaries, and many events including early Fiesta parades, the arrival of the first Southern Pacific train in Santa Barbara in 1887, and the Santa Barbara Earthquake on June 29, 1925. Funding for the Edson Smith Digitization Project generously provided by John C. Woodward.

Jace Turner, MLS, City of Santa Barbara Library, provided me with a excellent article about this very special collection: